Twenty two years ago, when I wanted a really good watercolour

without exception, they all said…well, there’s only one man…he

lives in Yeovil and he‘s called Ron Jesty, but you’d be very lucky to

get into one of his classes …there’s a long, long waiting list….but

somehow, thanks to a mutual friend whom some of you will

remember, Chris Clark from Castle Cary, he took me on, so I gained

not only a demanding teacher but in time a good friend, too.

Of course, many of you here have known him far longer than I

and friends of very long standing. And you will surely be able to add

sure he would want to thank us all for being here. Maybe he would

be surprised and rather pleased to see so many.

Ron took such a delight in all kinds of things, great and small, and

enjoyed sharing them, right to the end. Just three days before he

died, as chance would have it, we were in his flat and he went to

make us coffee, and, like everything he did, his coffee making was

done with absolute precision….exactly the right strength for each of

coming…but when he finally emerged from the kitchen, there was a

raspberry …which he had gleefully discovered in one of his favourite

haunts, the food floor at Marks and Spencers, (a place he said he

could not possibly do without, though latterly he had to sit down on

a bench a couple of times on the way to catch his breath). And as

we savoured the delicacies, we planned a trip to Portland Bill,

another favourite haunt, where he loved to sketch rocks and sea

and sky, as is so wonderfully shown on our service sheets.

Of course he was the kindest of men and a wonderful friend, his

selflessness supremely shown in his truly remarkable care of

Margaret in her final illness. But his slight, and latterly bent, figure,

and his mild and gentle, self effacing, style, belied great strength,

and sometimes a surprising directness. He was an uncompromising

perfectionist and a disciplinarian as pupils and colleagues soon

When once, in his class at Yeovil Arts Centre, we were attempting an

exercise in landscape composition, with strips of dark cloud in the

upper part, he came to look at my effort (this was always a distinctly

anxious moment). He pointed to a spot towards the top and said: “It

needs to be divided here.” “With another strip of cloud?” I asked.

”No, with a pair of scissors.”

Ron was born in Weymouth, one of three brothers. I remember him,

on a trip to Dorchester, telling me about his childhood visits to

grandparents there who remembered Thomas Hardy cycling past

market along the main streets.

After school, he went to train as a mechanical draughtsman, with a

marine engineering firm (an experience which developed his passion

for precision and detail), and when the torpedo factory where he

worked was destroyed by German Stuka dive bombers, he was

saved, as was everyone who worked there, by merciful prior warning

In 1945, he developed TB and was sent to a sanatorium in Ventnor

on the Isle of Wight. He repeated, only a week or two ago, what he

had often said, that it was the best thing that had happened to him.

And this was not altogether a joke, and there were three reasons.

The first, and by far the most important, was that one time, on the

way back across the water, he suffered a tremendous storm and,

when he arrived, collapsed with total exhaustion, awakening much

later to the memorable smile of a nurse bringing him breakfast. The

nurse, of course, was Margaret. And we may all know already the

remarkable story of how, as their affection evidently grew, one of

was now herself a patient, having contracted lung disease) might

have no more that two years to live, whilst quite independently

another took Margaret aside to say the same about Ron. They were

both warned not to get too serious. But they did get serious, and

their marriage, in 1953 lasted for 57 years, whilst Ron very recently

Ron was in hospital for more than six years, and always afterwards

recalled two other benefits that time had given him….one was his

love of music; he had one day asked the man in the next bed what

he was listening to on his headphones. ‘Grieg’ the man replied. The

word Grieg at that time meant nothing to Ron, but his neighbour

explained, and so began an introduction to classical music. We have

Grieg’s music here today, and just a week or two ago, Ron went

over to the Octagon theatre with a friend, one of his last treats, and

enjoyed a marvellous performance by the Philharmonia Orchestra.

Ron develop his interest in watercolour painting to such good effect that,

when he left hospital, he started to take commissions from local

printers for illustrations. A course in Illustration at Weymouth

A recurring thread in his life…fun, sometimes expressed in the form

of mischievous practical jokes, was evident in hospital too, with

stories of rotting fish strategically positioned under a bed for maximum effect.

Ron and Margaret‘s married life started in a flat in Beaminster, where they

happilywatched the local cricket club. But in time he was able to start his

much good work in advertising, preparation of brochures and illustration, for Westlands and many others. And Ron assembled a wonderful team, some

are here today. Ron kept on repeating his gratitude to those friends, old

these last years through Margaret’s illness and death and beyond until now.

And two other familiar threads run through the time of Jesty Graphics.

One is his love of pranks…this time involving the comic potential of a lockable photographic dark room…and the other is that uncompromising perfectionism.

would take his work to Ron for approval with considerable trepidation,

lest it might be judged not to be quite up to the mark.

In time, Ron‘s sight began to fail and he sold the business, but he

could see plenty well enough to concentrate now on his painting,

influence through his teaching. When he could be persuaded to give

a demonstration to his class at Yeovil Arts Centre, there were

paints just so. Then, at last, he would make the first mark on

the paper as we all marvelled. And it is his demonstration of the

formed tiny shapes, often of figures on distant rocks, the precision of

draughtsmanship, and distillation of a complex subject into a clear,

apparently simple composition, that make him such an individual

Happily, his work is to be seen in many places and his influence as a

teacher is readily apparent in the work of so many, amateur and

professional across this part of England and elsewhere, who have

been fortunate enough to learn from him. He said that he learned

to systematise his ideas about painting from the artist Jeff Pickering

who had retired to Sherborne, and, as Ron said “helped me put my

Ron exhibited at the Royal West of England Academy, the Royal

Institute of Painters in Watercolour, the Royal Society of British

Artists, and in galleries across the region. His work and ideas were

Ron was always open to new delights, whether in art or friendship or music

or Hardy’s work or indeed, as we have seen, in Marks and Spencers

foodstore (where he was a regular, much loved by all the staff). And he

delighted too in the natural world around him, a delight which the magical

work in his paintings and sketchbooks beautifully records. In recent times,

As the sight in his one good eye grew weaker, Ron understandably feared

surgery in case he became blind and unable to look after Margaret, but in

time, and after her death, he did indeed have laser surgery to remove a

cataract. And he said it was like being reborn. His own paintings on the

wall which had looked uniformly dull and grey suddenly sprang to life. …

Of course there is so much more that could be said. I heard only the

other day of his saying about their wonderful marriage: “There’s

Margaret, and that’s how we go through life … doing nothing for each other.”

No doubt we shall share more stories after this service, but, for the

moment, we can maybe just reflect that we are lucky to have known

such a man and to be here to celebrate such a life.

Delivered at the funeral service on 21 July 2016 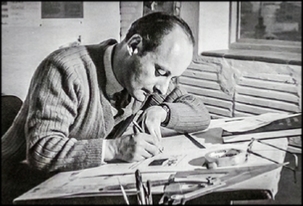 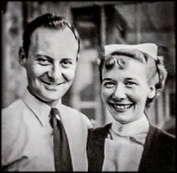 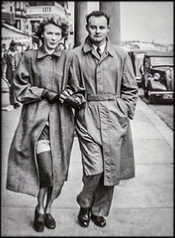 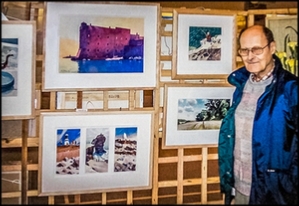 Pictures on this page 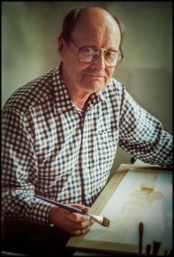