This “Wessex Photos, UK” website would not be complete without mention of Ronald Jesty.

A former Graphic Artist, he gave this up to become a full-time artist in 1978. He is well known for his paintings, particularly in watercolours, of  the Dorset coastline. When visiting Dorset be sure to notice his picture cards for sale in local shops.

Many of his beautifully arresting watercolour pictures are landscapes of well-known coastal landmarks such as: 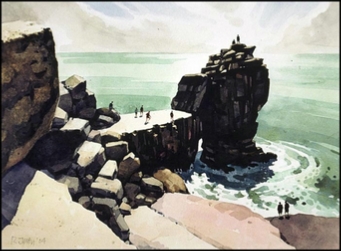 (Click this picture to see real photo of Pulpit Rock) 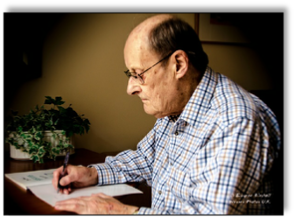 “Ron” Jesty, a prodigious talent,  was born in Weymouth not far from the birthplace of Thomas Hardy.  Much of Ron’s work reflects ‘Hardy Country’. His favourite painting spot, he told me, was Kimmeridge, Dorset.

He was brought up in Weymouth where is father Cyril Benjamine Jesty was also born in 1892. He contracted  Tuberculosis and during his convalescence in Ventnor, Isle of Wight, met his future wife Margaret Johnson.

He began his career as a graphic artist and during the second world war worked at Portland on torpedoes translating “on-board” graphs of performance into new graphic presentations. One day, when Portland was bombed, he was evacuated and then worked from Street, in Somerset.

Self-trained as an artist, but influenced by Pickering, he sold his business to become a full-time artist.

He lived for many years in Brunswick Street, Yeovil, with Margaret and was an avid gardener. His steep garden he landscaped with Grey Lias Somerset stone and mastered the art of selecting the correct plants to grow in that terraced environment.

Following the death of Margaret he lost the will to produce paintings.  I used to provide him with videos of his beloved Dorset that I created from my photographs with accompanying music.  He loved these; and always knew exactly where they were taken.